Having recently invested in a slow cooker I have been trying out this new way of cooking with various recipes but so far the tastiest and most photogenic thing to come out of it is this amazing slow cooker pulled pork which I found on the Chow website. Its so easy as you just coat you hunk of pork shoulder with the spice rub and sit it on a bed of onion with some stock and wait for the slow cooker to work its magic. I found the pork already tasted so good so I didn’t want to cover it all in BBQ sauce but opted to add some on the side.

If you don’t have a slow cooker you can cook it in the oven as follows: preheat the oven to 220c or gas mark 7. Line a roasting tin with sheets of foil big enough to fold over the top of the pork. Put the pork into the hot oven for about 40 minutes until well browned, then take out and turn down the heat to 125c or gas mark ½. Fold the foil over the top to make a sealed parcel of pork. Return to the oven and cook for about 6-7 hours, then turn the heat back up to 220c or gas mark 7 and cook the pork, uncovered, for 10 minutes to crisp up. 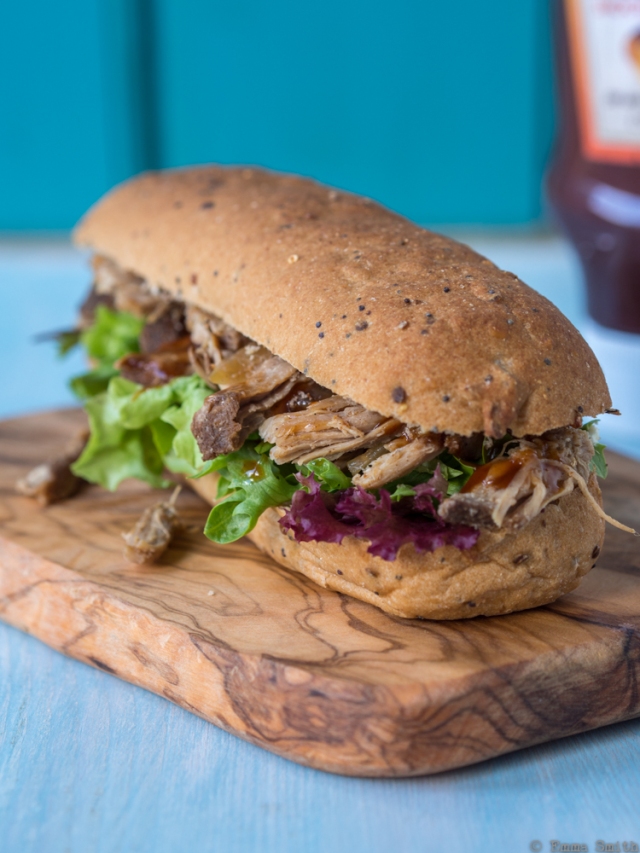 Spread the onions and garlic in an even layer in the bottom of the slow cooker and pour in the stock or broth.

Combine the sugar, chili powder, salt, cumin, and cinnamon in a small bowl. Pat the pork dry with paper towels. Rub the spice mixture all over the pork and place the meat on top of the onions and garlic. Cover and cook until the pork is fork tender, about 6 to 8 hours on high or 8 to 10 hours on low.

Turn off the slow cooker and remove the pork to a cutting board.

If the pork has a bone, remove and discard it. Using 2 forks, shred the meat into bite-sized pieces, discarding any large pieces of fat. Return the shredded meat to the slow cooker, add the barbecue sauce, if using, and mix to combine. If you’re not using barbecue sauce, use a spoon to skim and discard the fat from the surface of the strained cooking liquid, and then add a little of the liquid at a time to the slow cooker until the pork is just moistened. Taste and season with salt as needed.