At the beginning of June I went over to Spain and spent a few days in the Galician region. One of the highlights for me was a visit to Mercado de Abastos, the food market in Santiago de Compostela. Being one of the few times I have taken my camera out of the house I know I need more practice at shooting food in the wild as it were but was quite pleased with the shots I captured. The market is housed in fabulous cool granite avenues which was built in 1873.

Last time I was in Galicia I was fascinated by the Pulpeira stands. A traditional Galician dish where octopus is boiled in large pots, fished out with a hook, cut into slices on a wooden serving plate and then seasoned with olive oil and paprika.

Tetilla is a Galician artisan cheese made from cows milk. Tetilla is Galician for ‘small breast’ which describes the pear shaped cone of cheese. This cheese has a pale yellow, thin, natural rind or sometimes no rind can be seen at all. Its texture is soft, thick and smooth with scatterings of air pockets. Yellowish ivory in colour Tetilla has a creamy mouth feel with buttery, slightly bitter and tangy flavours surrounding the palate. The maturing, which takes place between 10 and 30 days, happens in the hot and humid climate of Galicia. 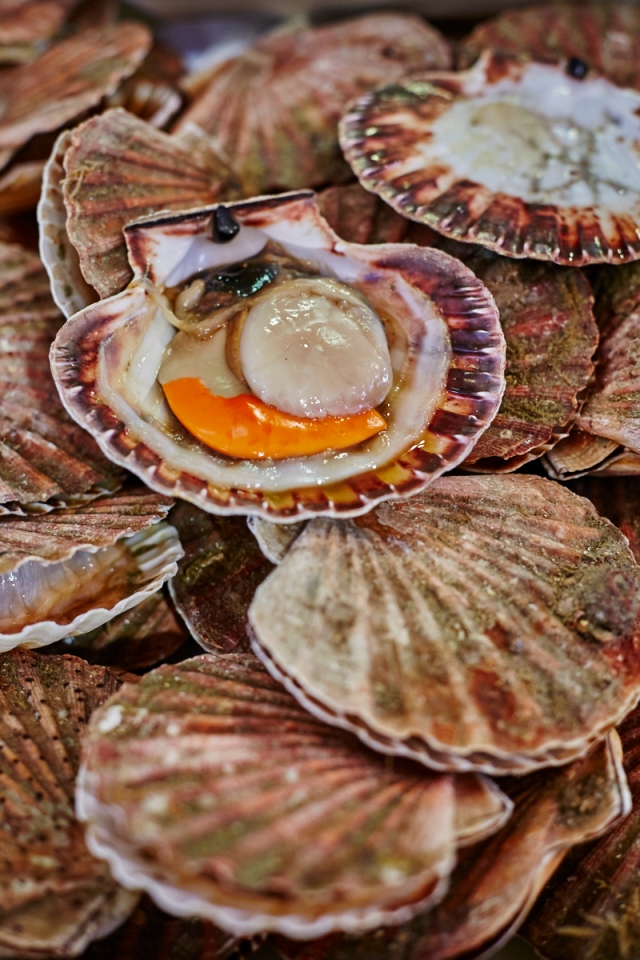 Padrón peppers or pementos de Padrón are probably my favourite food from this region. They are a variety of pepper from the Padrón region in the province of A Coruña. The peppers are customarily fried in oil and sprinkled with sea salt and served as tapas.

They are small peppers (about 5 cm long), with a colour ranging from bright green to yellowish green, and occasionally red. While their taste is usually mild, a minority (10-25%) are particularly hot. Whether a given pepper ends up being hot or mild depends on the amount of water and sunlight it receives during its growth, in addition to temperature. There is a saying that ‘some are hot and some are not’ as you cannot tell from size or colour which are the hot ones.

On the outside edge of the market is a huge range of fresh fruit and vegetables.

One of the avenues in the food market built in 1873. It is the second most visited sight in the city after the cathedral.

After working up an appetite taking in the sights and smells, we enjoyed lunch at Abastos 2.0 who source all their ingredients from the market and change their menu daily based on what is available that day. Below is a seafood and salmon starter that was served with crackers and guacamole.

Wreath is up! #christmasdecor #chrtistmaswreath #wreath #christmas
The light in my bedroom today is pretty nice #interiors #interiorstyling #upcycledfurniture #bluestarfern #antiques
4 years of work in the garden is finally paying off. I need to stop buying pots as I’m running out of space! Swipe to see the before photo #garden #beforeandafter #plants #flowers
Swipe to see the previous incarnations of the Lounge #interiordecorating #victorianarchitecture
New colours this year after 19 years for red and gold! #christmasstyle #interiordecorating
The reward for a trek up the steep hill onto #thelines Midsummers night a few weeks ago #wildgrasses #sunset #gillingham #igerskent
Frosty start #greatlines #kent #igerskent #visitkent #landscape #frost
Just found this old pic on my Mac of my bedroom before the move around because of noisy neighbours
Dining room detail. Still need to paint the sideboard grey..... #jobforanotherday #interiordesign #interiorinspo #interiorinspiration #myhomevibe #interiordecorating #diningroom #farrowandball #borrowedlight