I struggle to get used to the shorter days at the best of times but now that the blog is up and running I’m having to be super organised to get things cooked/baked during daylight hours so I can photograph them in natural light. I really was spoilt over the summer and miss not being able to shoot my week day dinners so be warned there will probably be a lot of baked goods appearing over the winter months!

With Bonfire Night almost upon us, I thought I would share my favourite gingerbread recipe which was torn from an issue of Waitrose Food Illustrated many moons ago. These gingerbread cupcakes with lemon icing are light and airy rather than dense and sticky and so quick to make. They would also be great around Christmas time.

For non British readers, Bonfire Night is also known as Fireworks’ Night or Guy Fawkes’ Night. It’s a British tradition dating back to the Gunpowder Plot of 1605, when Catholic conspirator Guy Fawkes tried to blow up the Houses of Parliament and King James I.

The anniversary of Fawkes’ arrest on 5 November is celebrated each year with fireworks and bonfires.

Preheat the oven to 180c or gas mark 4 and line a 12 hole muffin tin with paper cases.

Tip the 100g butter, molasses and golden syrup into a small saucepan and heat gently, stirring, until the butter has melted and the mixture is smooth. Remove from the heat and stir in the milk then set aside to cool.

Sieve together the flour, spices and bicarbonate of soda into a bowl then add the chopped stem ginger.

Once the molasses mixture is cool, beat in the egg and then pour onto the dry ingredients. Fold in and stir to combine fully. Divide the mixture equally between the 12 cases making them half to two-thirds full.

Bake for approximately 15 minutes until golden and a cocktail stick comes out clean. Leave to cool on a wire rack.

To make the icing, beat the 40g butter in a large bowl and then sieve in the icing sugar. Beat to mix, though at this stage it won’t look like it will come together, but don’t worry! Add the lemon juice gradually, beating until it comes together as a smooth but pipe-able icing. Transfer to a piping bag fitted with a star nozzle and pipe stars on top.

Cut the ball of stem ginger into small 3-4mm sized cubes and toss in the caster sugar until they are fully covered in sugar. Scatter over the cupcakes. 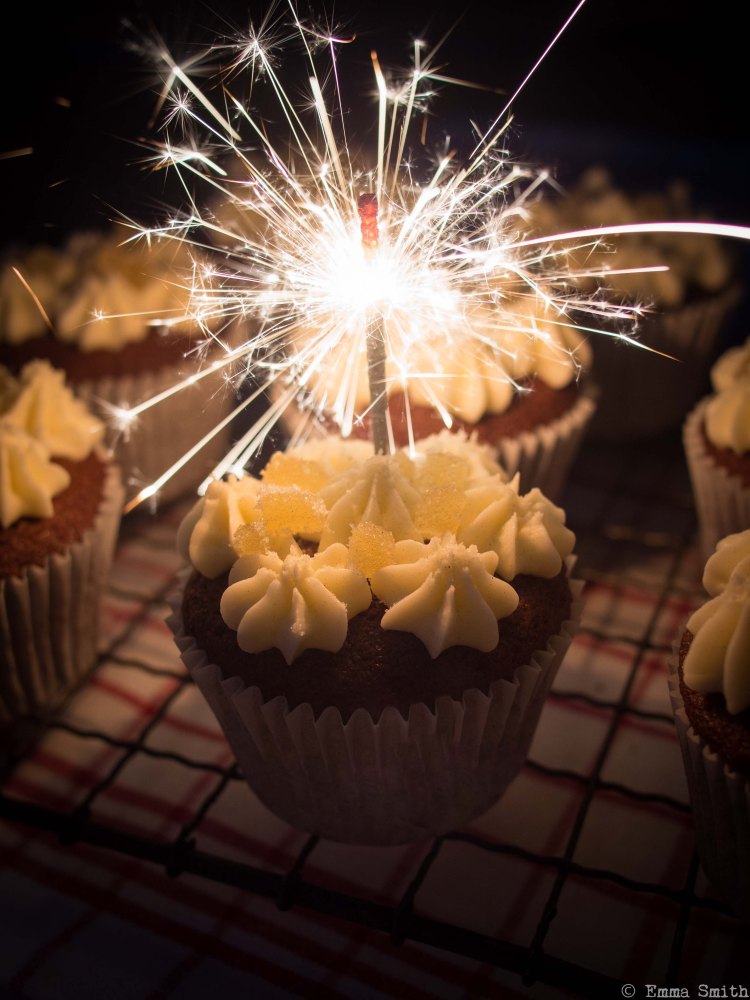