Forgive me for reposting this but I can’t leave my terrible first post up on here and I think the combination of maneesh and baba ghanoush is a winner so this week you get two recipes instead of one. Baba Ghanoush is my favourite dip narrowly pipping cool and creamy Tzatziki at the post and I have been making my own for a few months now. There is a stall – Arabica Food and Spice – in Covent Garden who make the best Smoked Aubergine dip I have ever tasted but this is pretty good too. I have halved Paul Hollywood’s Maneesh recipe which was taken from his book Paul Hollywood’s Bread

For the baba ghanoush:
2 medium to large aubergines
1 clove of garlic (add more if you like garlic, I’m not a massive fan)
Sea Salt (I use Cornish Sea Salt)
2 tbsp Tahini/sesame seed paste
2 tbsp extra virgin olive oil
Juice of a small lemon or half a large one
Pinch of paprika

Mix together the flour, salt, sugar and yeast. Add the olive oil and all but about 2 tablespoons of the water. Using your hands mix the ingredients together and gradually add the rest of the water until all the flour has come away from the sides of the bowl. and you have a soft dough – you may not need all of the water.

Knead the dough by hand or using the dough hook in a stand mixer for 5-10 minutes until it forms a smooth dough. Place in an oiled bowl, cover and leave to double in size.

While the dough is proving make a start on the baba ghanoush. To get the smoky flavour into the flesh of the aubergines, char grill them directly on a gas hob by laying them directly onto the metal pan stand or grill over a hot barbecue. Turning with tongs you want to evenly char the skins for 5-10 minutes. The longer you char them the smokier the dip.

Once the skins have blistered place on a baking tray and roast in the oven for around 30 minutes. While the aubergines are roasting, crush a garlic clove and mix with the sea salt creating a paste. Transfer the paste to a medium sized bowl then add the tahini, olive oil and lemon juice mixing until smooth.

Remove the aubergines from oven when they are all wrinkly and leave to cool for at least 10 minutes. At this point increase to oven to 230c or gas mark 8.

Slice into each aubergine lengthways and scrape out the flesh making sure to get some of the really smoky dark brown flesh that was closest to the skin. Place the flesh on a chopping board and roughly chop into small chunks then scrape into the bowl of tahini, garlic and lemon juice mashing it together with a fork.

By now your maneesh dough should have doubled in size. Tip the dough onto an oiled work top and knock the dough back by folding it in on itself until al the air is knocked out and the dough is smooth. Split the dough in half and roll into two circles approximately 20-23cm round.

Place onto lined baking trays, cover with oiled cling film and leave to rest for 20 minutes.

Mix the topping ingredients with a little olive oil until you have a thick paste. Once rested, brush the breads with olive oil and spread the topping evenly over both breads. Bake for 10-15 minutes.

Remove from the oven and transfer to a wire rack to cool before slicing and serving with the baba ghanoush. 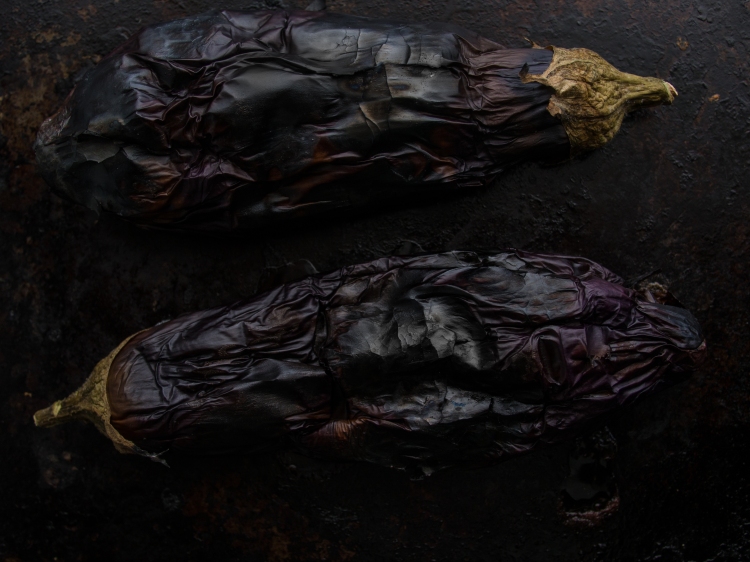